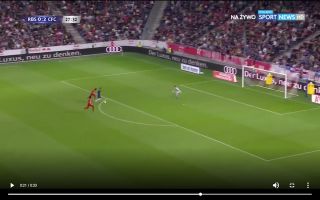 Christian Pulisic is one fire for Chelsea tonight, the United States international has had a hand in all three of the Blues’ goal against Red Bull Salzburg.

Pulisic got himself on the scoresheet for the second time tonight in the 28th minute of this evening’s pre-season friendly clash between Chelsea and Austrian giants Red Bull Salzburg.

Kepa threw the ball to Ross Barkley after saving a header from a corner. The England international carried on his spectacular pre-season form by launching a magnificent long-range pass into Pulisic’s path.

The former Borussia Dortmund star showed expert control with his chest before charging towards the goal, the exciting winger poked the ball past the on-rushing goalkeeper to extend Chelsea’s lead.

Pulisic opened the scoring for Chelsea with a superb strike.

Barkley returned the favour to Pulisic with his stunning assist, Pulisic won the penalty that the playmaker tucked away earlier in the game.

Check out Pulisic’s second of the game below:

Pulisic has picked a prime time to get into form, Chelsea have just one more pre-season clash before their mammoth Premier League opener against Manchester United.