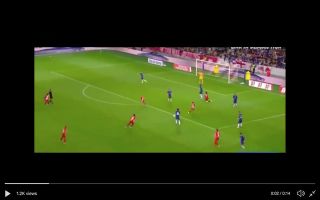 David Luiz had a moment to forget for Chelsea during their pre-season friendly win against Austrian giants Red Bull Salzburg this evening.

Salzburg managed to pull a goal back in the 50th minute of the tie, however, the side wouldn’t have had the chance to put the ball into the back of the net if it wasn’t for David Luiz.

Fans will be scratching their heads trying to figure out what Luiz was trying to do as he blasted the ball out for a corner in a bizarre attempt to play out from the back on the edge of the box.

The resulting corner saw Jerome Onguene head the ball into the back of the net.

Luiz was also labelled as “the worst defender at the club” by one fan after his poor performance, the Brazilian was heavily criticised for his display take a look here.

Take a look at Luiz’s misplaced pass before Salzburg’s goal:

Frank Lampard should be keeping a close eye on Luiz, the 32-year-old looked out of his depth against respectably low-level opposition tonight.

Luiz’s error-prone style could be costly for the Blues in the Premier League and Champions League.