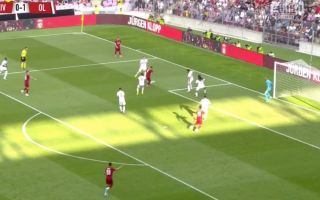 Roberto Firmino was on hand to equalise for Liverpool this evening, as the Brazilian bagged a fine goal from a tight angle in the Reds’ pre-season friendly clash.

After having gone 1-0 down thanks to a penalty from Memphis Depay, Klopp’s side were left minutes later, as Firmino latched onto a cross from Xherdan Shaqiri before firing home with his left from an acute angle.

It was a great turn and finish from the Brazilian, who will look to improve on the average goal tally he managed for the club in all competitions last year during the season ahead.