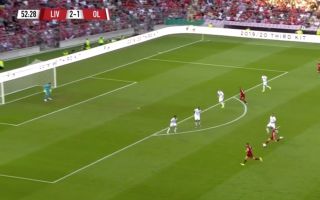 Harry Wilson scored an absolute peach of a goal for Liverpool this evening, as he handed the Reds a 3-1 lead in their pre-season clash against Lyon.

Having taken the lead in the first half after falling behind to a Depay penalty, Wilson gave the Reds a two-goal cushion in the second period with a brilliant strike.

Having pick up the ball from some way out, Wilson lined up a shot that flew straight into the top corner from 30 yards, leaving the Lyon ‘keeper with no chance.