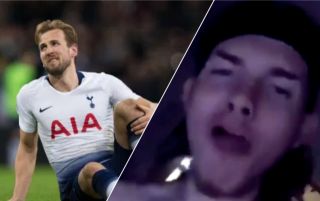 Harvey Elliott seems to have done himself no favours this year, as a video of the new Liverpool man mocking Harry Kane after last season’s Champions League final has appeared online.

Elliott, who joined the Reds from Fulham earlier this week, is just 16 years old, and it seems like a really promising talent that we’re sure Jurgen Klopp is glad to have got his hands on.

However, despite making PL history this year, Elliott still hasn’t done himself many favours, after a clip of his mocking Spurs superstar Kane following the 2019 CL final has emerged on Twitter.

As seen above, Elliott has been caught mocking Kane and the way he talks, something that has caused uproar amongst a number of football fans.

As seen below, a number of fans have flocked to Twitter to slate Elliott for his actions after Liverpool’s final win over Spurs.

Given that he’s just 16, we may be able to let Elliott off on this occasion, however if he were to do it again, we doubt most people would share the same way of thinking…

hope his legs get broken on his debut

What an absolute prick.