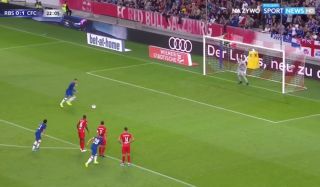 Chelsea midfielder Ross Barkley added to his pre-season tally for the Blues this evening, as he put the west London side 2-0 up against Red Bull Salzburg from the penalty.

Having just gone 1-0 up thanks to a strike from Christian Pulisic, Lampard’s side were handed the chance to make it 2-0, after they were awarded a penalty following a foul on the American.

Barkley then stepped up the penalty and powered it home, adding to the goals he scored against Barcelona and Reading in the process.

It seems like the England international is certainly stating his claim to be a starter for the Blues next season!