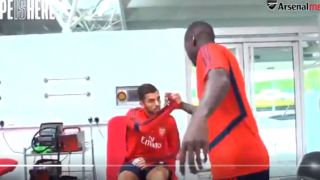 Arsenal fans have been given a glimpse of the exciting new partnership to come at the Emirates Stadium this season in the video below.

Both are extremely exciting additions to this Arsenal squad, giving Unai Emery real hope of getting the team back into the top four in 2019/20.

Pepe and Ceballos have now been introduced, and fans will be hoping they can combine well on the pitch in the new season ahead.