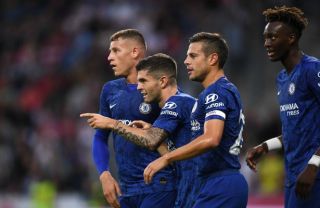 Pulisic opened the scoring for Chelsea in Salzburg after just 20 minutes, marking his first goal for the Blues. Just three minutes later, the American won a penalty and Ross Barkley converted from the spot to put Chelsea 2-0 up.

Five minutes after doubling Chelsea’s lead, Barkley delivered a magnificent through ball to Pulisic who outran two defenders before comfortably slotting the ball in the back of the net past Red Bull goalkeeper Cican Stankovic.

The Austrian club pulled one back in the second half thanks to Jerome Onguene before Pedro added Chelsea’s fourth. The final few minutes saw three goals being scored, two by Red Bull’s Takumi Minamino and one from Michy Batshuayi.

Following the match, Pulisic expressed his delight on scoring in a Chelsea shirt for the first time. While talking to Chelsea TV, the 20-year old said: “Really happy to come out here and get the win and to score my first goals for Chelsea.

“Maybe three [would’ve been better] but I was pretty happy with the performance and it was a good win. [Salzburg] are not a bad team at all. They gave us a challenge. They have some really good players and we did a really good job to start strong. We were clinical and got the lead early so that helped.”

Pulisic also praised Chelsea’s midfield for their passes. He added: “I wasn’t even sure [Barkley] was going to see me, but the ball came to me — I think that was the one I received with my face; it was funny! It was an amazing pass and I just did the rest. The midfielders that are on this team are amazing quality, in the passes that they can make, and their movement, which is really good, and that helps me so much.”

Chelsea next play in their final pre-season game against Borussia Monchengladbach on Saturday before starting their Premier League campaign against Manchester United at Old Trafford on August 11.

However, Blues fans will certainly be buoyed by the growing impact that Pulisic is having and his link up with the midfielders ahead of the new season, as he’ll be crucial in helping to fill the void left behind by Eden Hazard after his move to Real Madrid this summer.