Arsenal boss Unai Emery has refused to confirm that the club has an agreement in place to sign Lille winger Nicolas Pepe.

According to Metro Sport, Lille President Gerard Lopez revealed on Wednesday that a £73 million deal had been struck between the two clubs to bring Pepe to Emirates Stadium.

An official announcement is expected imminently, with the Gunners on the verge of landing one of the most in-demand and highly-rated young players in Europe.

Pepe notched 22 goals in Ligue 1 last season while also adding 11 assists and Arsenal have been in the market for a quality wide man since the end of the 2018-19 campaign.

It appears they have secured a primary target ahead of a number of high profile potential suitors, but Emery has insisted that a transfer is not yet finalised.

The Gunners boss spoke to the media following Arsenal’s penalty shootout victory over Angers on Wednesday, remaining coy on speculation regarding Pepe.

As per Metro Sport, Emery stated: “He [Pepe] played here in Angers a few years ago, and then in Lille.

“He has progressed as a player. We are speaking about a lot of players, we want to select on players who can really help us, give us big performances and improve our squad.

“We have different options. This one at the moment is not closed, but he is one we are following.”

Arsenal have already brought in Dani Ceballos from Real Madrid on loan, William Saliba from Saint Ettiene and Gabriel Martinelli from Brazilian club Ituano, amid links to a few further additions before the August 8 deadline.

Emery went on to concede there is a “possibility” that the Gunners bring in Pepe in the coming days, adding: “No deal is official now, and I will only speak in the next hours or days if it can be official for us. 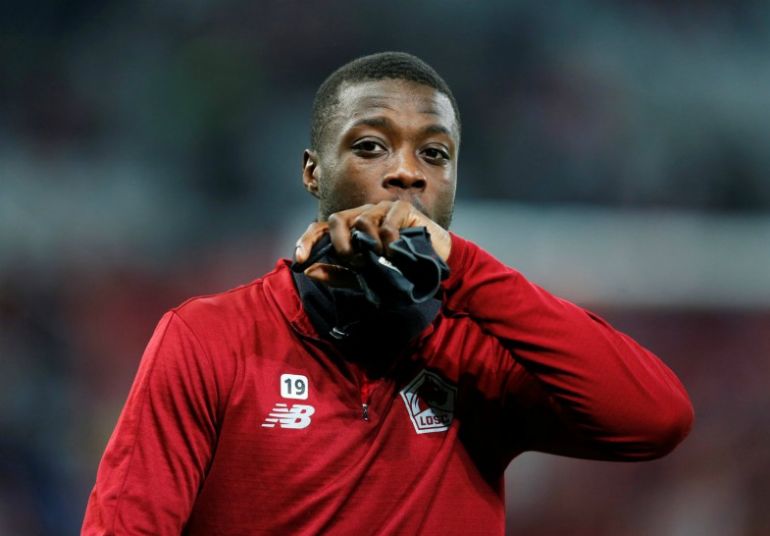 “We are working on the possibilities to sign players. We signed [Dani] Ceballos, and we have a possibility with Pepe.

“We are looking for the possibility to improve, but only if we can take more steps in the squad.

The Spanish coach also responded when asked if Pepe and Pierre-Emerick Aubameyang could link up well together at Emirates Stadium.

“Yes first because he is left-footed,” said Emery.

“We have a left-footer in Bukayo [Saka], a young player who has a big future for us.

“For example on the wing one left-footed player can play on one side or the other. It can give us different options.”