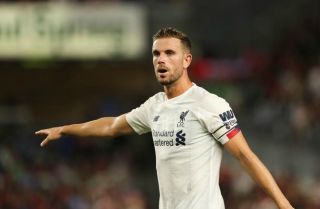 Liverpool captain Jordan Henderson feels that Sunday’s match is all about Liverpool winning the Community Shield and not Liverpool beating Manchester City.

After a string of winless results, Liverpool ended their pre-season with a 3-1 victory over Lyon in Geneva. Liverpool’s next match is the highly anticipated Community Shield against Manchester City. This will be Liverpool’s first Community Shied since 2006 when they beat Chelsea 2-1. Back then, Henderson was with Sunderland’s youth team.

The Reds skipper said that his main motivation for Sunday’s match is Liverpool winning the Community Shield rather than beating Manchester City.

Speaking ahead of the game, Henderson told the official match programme as quoted by Liverpool’s official website: “I don’t think I’ll ever tire of playing at Wembley.  I’ve been lucky to play here a few times with Liverpool and of course England. The feeling of coming here and it being special never gets old. It’s a big game and a big occasion.

“It’s a first for me – playing in a Community Shield – but I know it’s a competition Liverpool have always taken seriously, so that brings a responsibility for whoever gets picked to do everything we can to win. I’m not bothered about an advantage, we just want to win – full stop. The opponent is only relevant because in order to win it, we have to beat them. Sure, it’s the same for City. It’s the next game for us and therefore the next one we can win – that’s our attitude.

“We’ve huge respect for City and what they achieved last season and we also respect they’ll be a big force again this season – but [this match] isn’t about anything other than doing our best to win for our supporters.”

Liverpool have all of their regulars back except for Sadio Mane who will return to the squad on Monday. Provided the Reds beat City on Sunday, it’ll be their 16th Community Shield title. Jurgen Klopp’s men may not have beaten Guardiola’s side last season but given the kind of results they produced last season and the kind of players they have, it won’t be much of a surprise if Henderson lifts the Community Shield on Sunday.