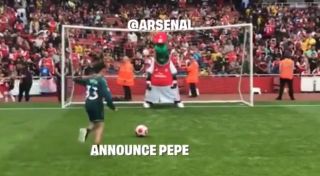 Arsenal effectively announced the signing of Nicolas Pepe from Lille with this hilarious video clip below.

The short video involves their club mascot Gunnersaurus being hit by a ball in a penalty shoot-out with a young fan.

Our mentions since the weekend… ? pic.twitter.com/xrbWWCOVHF

Alongside the kid is ‘Announce Pepe’ with Gunnersaurus labelled as ‘Arsenal’, as they reference the battering they’ve had in their mentions to finally announce the deal.

Pepe looks a hugely exciting purchase so it’s little wonder Arsenal fans have been longing for the strongly rumoured move to become official.

This tweet was followed by a more proper confirmation explicitly welcoming Pepe to the Emirates Stadium:

Welcome to The Arsenal, Nicolas Pepe ?