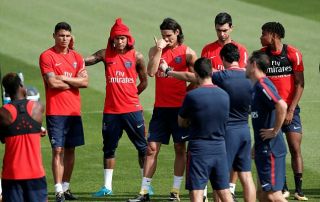 PSG have reportedly slapped a €300 million price tag on Brazilian winger Neymar who has been linked with a move to Barcelona.

Neymar has been linked with a move away from PSG for a while now, but PSG valued him at €222 million earlier this summer and wouldn’t accept any fee lower than that according to MARCA. According to L’Equipe (via Sport), PSG also rejected an offer of €40 million plus Ivan Rakitic and Philippe Coutinho for the Brazilian.

According to Spanish weekly Don Balon, Florentino Perez is interested in signing Neymar and PSG President Nasser Al-Khelaifi prefers selling him to Real Madrid, setting up a possible transfer battle between the La Liga giants.

Now, L’Equipe report that the Ligue 1 champions have set their asking price for the Brazil international at €300 million (€273 million).

Barcelona have already spent a great deal in securing the signings of Frenkie de Jong and Antoine Griezmann this summer, and so will perhaps not have that kind of financial muscle to buy Neymar.

Hence, there’s every chance that PSG have set that amount to fend off any interest from the Blaugrana or any other club for that matter.

Neymar hasn’t had a single full season since his move to PSG that cost the French giants €222 million according to BBC. The Brazilian has netted 51 goals in just 58 appearances for the club so far, but has seen his spell in Ligue 1 disrupted by serious injury setbacks.

Time will tell whether or not any interested parties are willing to satisfy PSG’s reported demands, or if he will remain with the club for another year.