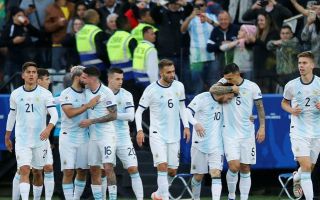 Tottenham Hotspur are reportedly on the brink of signing Giovani Lo Celso and the 23-year old midfielder will sign a five-year contract with the club.

Spurs have been linked to Lo Celso for some time with a report from El Transistor claiming that the Champions League runners-up made a €68 million bid for the Real Betis midfielder.

Now, La Gazzetta dello Sport journalist Nicolo Schira has said that Lo Celso will sign a five-year contract with the Lilywhites that would see him earn €4 million a year. Schira wrote on Twitter: “Last details for Giovanni #LoCelso to #Tottenham. He will sign a contract by €4M a year until 2024. #transfers #THFC.”

SEE MORE: Former Spurs flop apologises for streaming his own sex tape while trying to google himself

Last details for Giovanni #LoCelso to #Tottenham. He will sign a contract by €4M a year until 2024. #transfers #THFC https://t.co/fKyCcUtJJB

As seen in Schira’s previous tweet above, the north London club are said to be close to signing Lo Celso for a transfer fee of €60 million and Real Betis would replace the Argentine with Nabil Fekir. Betis have since officially signed Fekir and so it seems that Lo Celso will now join Spurs.

The 23-year old who joined Real Betis on loan from PSG for the 18/19 season, scored 16 goals and provided six assists in 46 appearances across all competitions. His performances saw Betis sign him on a permanent basis.

Following the end of the season, Lo Celso did well for Argentina in the Copa America, scoring a goal in the quarter-final while providing an assist in the third-place match against Chile.

Provided Spurs sign Lo Celso, it will be their third signing this summer. Mauricio Pochettino’s team have already added Jack Clarke from Leeds United and Tanguy Ndombele from Lyon.