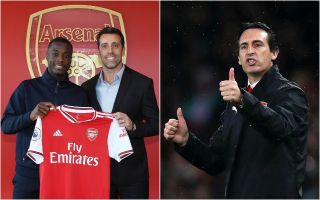 Arsenal manager Unai Emery has made some exciting claims about the club’s completed transfer swoop for Nicolas Pepe today.

The Ivory Coast international was announced by the Gunners this afternoon and looks potentially like the best signing made by any Premier League club so far this summer.

Pepe looked world class in Ligue 1 last season and is surely a big step up for Arsenal in attack after relying on the highly inconsistent and ineffective Alex Iwobi and Henrikh Mkhitaryan in attacking midfield last term.

Emery has discussed the new arrival and Arsenal fans will no doubt be glad to hear some of the things the Spanish tactician is saying about the 24-year-old.

?? The moment you were all waiting for! ?

Firstly, speaking to the club’s official site, Emery confirms that AFC had to beat off other top European clubs to Pepe’s signature this summer, which is hardly surprising but a reminder of what an achievement this purchase really is.

“Nicolas is a highly-rated and talented winger who was wanted by many of the top teams in Europe,” he said.

Secondly, Emery stated his belief that Pepe can add a number of important things to his team’s attack in 2019/20, namely goals, pace, power, and creativity.

He added: “Signing a top-class winger has been one of our key objectives in this transfer window and I’m delighted he’s joining.

“He will add pace, power and creativity, with the aim of bringing more goals to our team.”