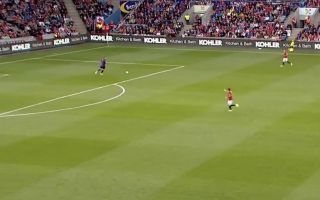 Manchester United goalkeeper David de Gea showed off his outstanding ball control during a 1-0 win over Kristiansund on Tuesday.

The Red Devils emerged victorious in the penultimate game of their pre-season campaign in Oslo, thanks to a late Juan Mata penalty.

Ole Gunnar Solskjaer’s men have now won all five of their summer fixtures, but they were made to work hard for the win against a stubborn Norwegian outfit.

In a game of few clear cut chances, De Gea was given little to do as Kristiansund soaked up pressure at the other end, but he was still sharp with the ball at his feet.

At one point, the Spaniard controlled an awkward lofted back-bass with a sublime first touch with the outside of his boot, before kickstarting another attack for United.

Check out De Gea’s skilful technique below, via Twitter.

We all know @D_DeGea is good with his hands…

…but how about this for a touch?! ? #MUFC pic.twitter.com/ci9jYwuPNn