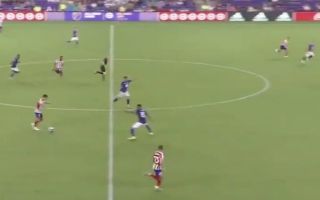 Atletico Madrid’s record signing Joao Felix showed his class with a stunning through ball to Diego Costa in a pre-season clash on Wednesday.

Felix moved to Wanda Metropolitano from Benfica for a huge £113 million fee at the start of July – as per The Guardian –  making him the fourth most expensive player of all time.

He grabbed his first goal for Diego Simeone’s side in a 7-3 friendly win over Real Madrid last Saturday and helped himself to another against the MLS All-Stars at Exploria Stadium in Orlando yesterday.

Felix also set up Costa to score Atletico’s final goal in a 3-0 victory, with a sublime 50-yard pass which fell perfectly for the Spaniard to take in his stride before finishing expertly past the onrushing goalkeeper.

Check out the brilliantly worked goal below, via Twitter.

.@diegocosta added the cherry on top with this beautiful goal to seal the win for Atletico De Madrid ?