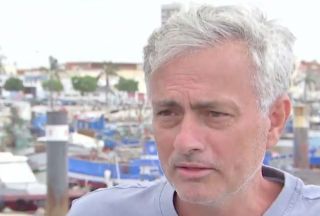 Jose Mourinho has backed Kurt Zouma to have a big season for Chelsea this year, assuming he gets the chance to prove his worth by Frank Lampard.

The Blues have had to deal with a transfer ban this summer, and so Lampard has been restricted in terms of working with the players already at his disposal and those who have returned from loan spells.

SEE MORE: Video: ‘Time will see’ – Mourinho refuses to predict whether or not Lampard will succeed as Chelsea manager

After impressing for Everton last season, Zouma will hope to have another chance to establish himself at Stamford Bridge this year, with Lampard showing in his time at Derby County and in pre-season that he’s ready to hand younger players important roles.

Zouma, 24, joined Chelsea in 2014, but has since been sent out on loan to Stoke City and Everton after initially playing a key role for the Blues and winning two Premier League titles with them.

Fresh doubts were naturally raised over his long-term future though given he was shipped out on loan again, but as seen in the video below, Mourinho firmly believes that with their transfer ban in mind, it’s time for Lampard to look to the Frenchman and install him as a pivotal figure in the backline as he is a natural solution to shore things up in defence.

Time will tell if the current Chelsea boss listens to that advice or looks at his other options as competition for places is still fierce with the likes of David Luiz, Antonio Rudiger and Andreas Christensen, but Mourinho sounds convinced that Zouma should be in line to have an important role this year which will ensure the transfer ban is irrelevant.

Opinion: Arsenal must learn from Chelsea as they once again show their infuriating ability to get it right with managers
More Stories Frank Lampard Jose Mourinho Kurt Zouma