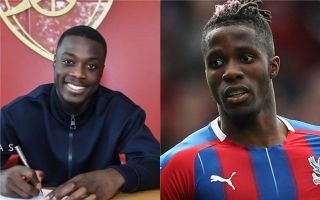 Crystal Palace star Wilfried Zaha has liked a post confirming Nicolas Pepe’s transfer to Arsenal in a rather intriguing move.

The Ivory Coast international may have just been sending a message of congratulations of sorts to Pepe, his fellow countryman, though this comes in a summer in which he has also been linked with the Gunners.

The Independent recently reported on why Arsenal were set to choose Pepe over Zaha, with the pair playing in the same position.

However, it has also been claimed by i News that the north London giants could still pursue Zaha to go alongside Pepe.

Is the Palace star therefore showing his enthusiasm about a quality signing for his future club? We’ll have to wait and see…