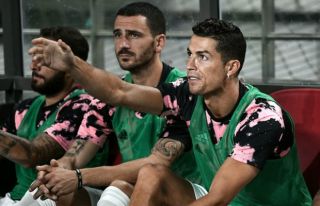 Seoul Metropolitan Police will reportedly conduct an investigation as to why Cristiano Ronaldo did not play a single minute in Juventus’ friendly against K-League All Stars.

The Portuguese star was supposed to play at least 45 minutes as per a contract. However, he sat out the entirety of the match in the Olympic Stadium, Seoul as Juventus came back from 1-3 to draw 3-3.

The closest the crowd came to seeing Ronaldo on the pitch was when K League’s Cesinha celebrated like the former Real Madrid star after scoring.

Following the match, Juve manager Maurizio Sarri said that the reason the 5-time Ballon d’Or winner did not play was because he was tired. As quoted by 90min, Sarri told Gazzetta Dello Sport: “This evening we gave a chance to young players, who were ready. Ronaldo? He was expected to feature briefly, but today I talked to him and he was very tired, so we decided to keep him at rest. We played in a beautiful stadium, with a large crowd and a perfect turf.”

However, the K League was not pleased with Ronaldo sitting out the game and sent a letter of protest to Juve chairman Andrea Agnelli, demanding an apology from the Serie A giants. As quoted by Eurosport, the letter from the K League read: “K League clearly registers our profound indignation and disappointment to Juventus’ irresponsible behaviour and manners, and we strongly urge Juventus to offer a sincere apology and explain the reason for Ronaldo’s no-show.

The key point… is that Ronaldo did not play even for a minute contrary to the contract guarantee that he would play for at least 45 minutes. However, Juventus’ reply did not offer any apology nor did it explain what exactly happened that day.

“Juventus’ claim that it took roughly 1 hour 50 minutes to exit the airport proved to be a lie. It… took only 26 minutes to go through immigration for all 76 (members of the) Juventus delegation and it was verified by the Korea Immigration Service afterwards.

It is obvious to say that the club disvalued South Korea and neglected the current situation (which) originated from Juventus’ irresponsible behaviour and manners including Ronaldo’s no-show.”

Now, the Seoul Metropolitan Police will look into the matter and according to Chosun, an attorney named Oh Seok-hyun has filed a complaint against Juventus and TheFasta, the agency that organised the friendly. An officer said: “If we can’t find objective evidence of deliberate deception, no fraud case can be established and police can’t intervene since it would become a civil case.”

So far, Juventus haven’t issued any apology nor has Ronaldo spoken about his absence from the friendly.