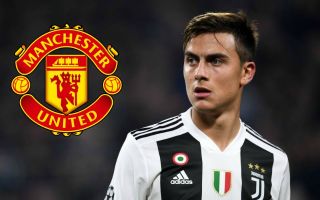 Juventus reportedly expect Paulo Dybala to reach an agreement to complete a transfer to Manchester United this summer.

According to the latest from well-connected journalist Alfredo Pedulla, Juve have now cleared Dybala to leave for Man Utd without talking to manager Maurizio Sarri or other key figures first.

The report states the Italian giants seem confident Dybala will make the move to Old Trafford, with Romelu Lukaku waiting to then be able to complete his move to Turin.

This follows another report on Thursday from Gianluca Di Marzio, who claimed Dybala was set for another round of talks with the Red Devils tomorrow after failing to agree a deal today.

This all looks promising from a United point of view, with the 25-year-old forward one of the finest attacking players in the world on his day.

With the likes of Alexis Sanchez and Anthony Martial not at their best for MUFC for some time now, Dybala could be just the upgrade the club needs to challenge for major honours in 2019/20.

Dybala has a record of 78 goals in 182 appearances for Juventus, and is the kind of player Premier League fans should enjoy watching in action if he does get his move.