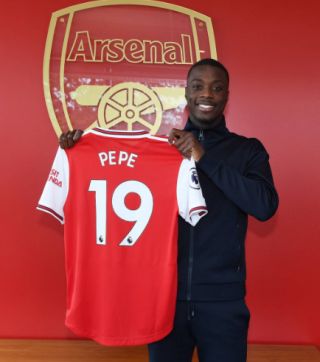 Liverpool were reportedly interested in signing Nicolas Pepe this summer prior to his move to Arsenal, but missed out for a key reason.

As noted by BBC Sport, the 24-year-old completed a move worth £72m to the Emirates this week as he looks forward to now establishing himself as a key figure for the Gunners moving forward.

It’s quite the coup for Unai Emery as he will look to try and get the former Lille star firing alongside a dangerous attacking duo of Pierre-Emerick Aubameyang and Alexandre Lacazette.

Impressively though, Arsenal were able to beat stiff competition to Pepe’s signing, with the Metro noting that Liverpool were believed to also have an agreement for the talented star at one stage.

However, it has now been suggested that there was a key reason behind the Merseyside giants’ failure to convince Pepe over a move to Anfield, despite the fact that they are obviously in a much stronger position to compete for major honours and are seemingly in a great place under Jurgen Klopp’s stewardship.

As reported by GFFN, it has been suggested by a highly-respected French journalist that it was Liverpool being unable to offer Pepe a key role in the starting line-up which ultimately saw them miss out despite Klopp having an ‘enormous desire’ to sign him.

In truth, it’s easy to see why that would be accurate as ultimately it would be difficult for Pepe to displace either Mohamed Salah or Sadio Mane in the starting line-up on either flank given their quality and importance to the side.

In contrast, Arsenal are lacking width and a different dynamic in the final third to allow the likes of Aubameyang and Lacazette to play more centrally, and so Pepe will be expected to be handed an immediate crucial role by Emery, whereas he would be fighting for a starting berth under Klopp.

That’s commendable in many ways as he has prioritised playing time and having the biggest role this year, but time will tell if he can now help Arsenal begin to challenge for honours again.