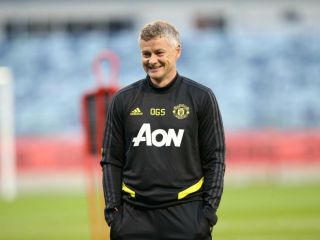 The Sporting captain had a terrific 18/19 season, scoring 32 goals and providing 18 assists in 53 appearances across all competitions. He later helped Portugal win the Nations League and was included in the Team of the Tournament.

Fernandes’ performances are said to have attracted attention from Manchester United and according to Corriere dello Sport last week, a fee of €70 million was agreed upon to bring the Portugal international to Old Trafford.

The 24-year old has also been linked to Tottenham and most recently Real Madrid, by Sky Sports and O Jogo respectively.

However, La Gazzetta dello Sport journalist Schira has said that Fernandes will join Manchester United following tomorrow’s Super Cup clash against Benfica. He wrote: All confirmed! After Portugal Super Cup #BrunoFernandes will leave from #Sporting to #ManchesterUnited. For him is ready a contract by €6M plus bonuses a year. #transfers #MUFF #mutd

All confirmed! After Portugal Super Cup #BrunoFernandes will leave from #Sporting to #ManchesterUnited. For him is ready a contract by €6M plus bonuses a year. #transfers #MUFF #mutd https://t.co/7t0QI5uRF2

As seen in the tweet above, Schira also said that the Portugal international will sign a contract with the Premier League giants that’ll see him earn €6 million a year plus bonuses.

Manchester United have already signed Daniel James and Aaron Wan-Bissaka this summer and are on the brink of landing Harry Maguire for £80 million according to Sky Sports.

Fernandes will also be a massive addition to Ole Gunnar Solskjaer’s squad and the Red Devils will hope to have a very, very good chance of finishing in the top four of the Premier League in the upcoming season with such important potential additions.