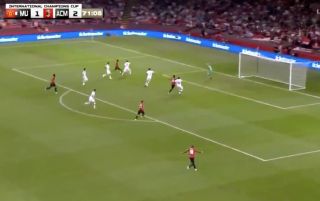 Jesse Lingard was on hand to equalise for Man United this evening, as he bagged a fine left-footed strike against AC Milan.

Having gone behind in the 60th minute due to a goal from Samu Castillejo, the Red Devils found an equaliser 12 minutes later, as Lingard fired home with his weaker foot from a tight angle.

It was a superb finish from the England international, whose goal has helped United avoid defeat in their last pre-season tie before their clash against Chelsea next Sunday.