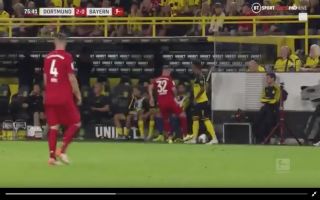 In the 75th minute of today’s clash between Bayern Munich and Borussia Dortmund, Joshua Kimmich appeared to stamp on Jadon Sancho.

The Germany international’s reckless challenge came after the ball ran out play, somehow the star managed to escape with just a yellow card.

Sancho was phenomenal for Dortmund tonight, the England international provided an assist and got himself on the scoresheet in Dortmund’s 2-0 win over their rivals.

This should have been a red card! Kimmich so pissed, Sancho has been unplayable today.
He must be signed next season at all cost. pic.twitter.com/zdD0uNEAtw

The challenge was so bad that Sancho was left wearing a bandage:

Jadon Sancho has a bandage around his foot. Joshua Kimmich really is a dipshit. #bvbfcb

Check out some reaction to Kimmich’s reckless stamp below:

What an absolutely disgusting act by Kimmich. I’m literally lost for words

Disgusting from Kimmich! He clearly stamps on Sancho and only gets a yellow card for that. WTF??? #BVBFCB #DFLSuperCup

Kimmich has to be off. Has to be

wow how is that not a red. intentional af

How can that be deemed noy violent conduct by var. it wasn’t anything else !!!

Such an Unnecessary foul smh

Kimmich should be punished severely if his actions are deemed to be deliberate, Sancho could have suffered a serious injury after the challenge.