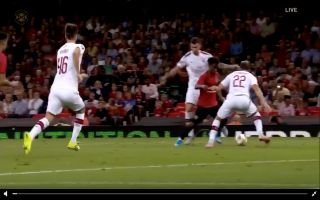 Despite being surrounded by three players, Gomes managed to twist and turn his way out of trouble before eventually being dispossessed.

The silky dribbling on show today proves that Gomes is a real talent for the Red Devils.

Check out Gomes’ silky footwork below:

These fans were particularly excited by the ace’s showing:

You can say what you want these kids got more Football brain than all those front 3 players we got.

This is filthy.. Someone quickly remind Angel Gomes those are people’s parents.. ????

He is our secret weapon next season if Ole plays him !

Manlikegomes almost took them around the globe twice ??? amazing talent he is

18-year-old Gomes will be hoping that his pre-season displays have convinced Ole Gunnar Solskjaer to give him a chance to shine this season.

The England Under-19s star is highly rated and it seems as though now is the time for the ace to breakthrough into United’s first-team.