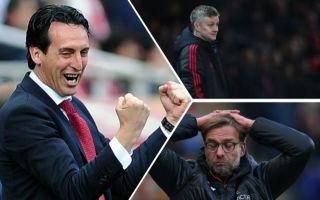 Arsenal have emerged as favourites to land Barcelona and Brazil star Philippe Coutinho this summer, with the bookies tipping him to move to the Gunners over both Liverpool and Man United.

The Sun have noted that the north London side are set to have talks with the Blaugrana regarding a surprise loan move for the Brazilian international.

And following this, it seems like the Gunners have become favourites to land Coutinho’s signature ahead of both Liverpool and United.

As per the same report from the Sun, Arsenal are 6/4 favourites to sign Coutinho with WilliamHill, whilst the Reds are 7/2.

United are 8/1 to land the Barca superstar, whilst PSG are as low as 4/1 in order to land a deal for the midfielder this summer.

Coutinho has struggled dearly to adapt to life in La Liga since his move to Barca from Liverpool back in 2018, thus a loan move away from Spain and back to the Premier League might be the move the player needs to reignite his stagnant career.

Arsenal have been tipped as favourites to land Coutinho this summer

Last year, the 27-year-old contributed just seven goals and assists for Valverde’s side, which is just one more than what teammate and defender Gerard Pique managed, a stat that highlights just how much the Brazil star has struggled to adapt to life at the Nou Camp.

The Gunners could do with signing a midfielder capable of scoring goals like Coutinho, especially seeing as they lost Aaron Ramsey to Juventus earlier this summer.

Will Coutinho end up swapping the Nou Camp for the Emirates this summer? The bookies certainly think it’s likely…