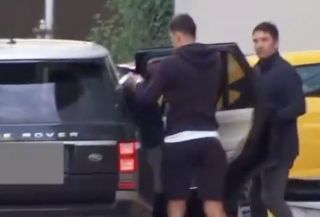 Harry Maguire has been spotted leaving a hotel in Manchester on Sunday morning as he closes in on completing his move to Man Utd.

The 26-year-old is reportedly on the verge of securing an £80m move from Leicester City to join the Red Devils, with Sky Sports also noting that Ole Gunnar Solskjaer revealed that there could be an announcement “very soon” after speaking to the media following the pre-season clash with AC Milan in Cardiff on Saturday.

As seen in the video below, Maguire in now in Manchester and will perhaps be completing the formalities of his move to Old Trafford with a medical and contract signing to come over the course of the day.

It appears to be only a matter of time before he is officially announced as a United player if everything goes to plan, as the towering centre-half was later seen arriving at Carrington for his medical, as seen below.

Given the Premier League giants struggled so badly with a leaky defence last season, one that conceded 54 goals in 38 league games, Solskjaer will have been desperate to bring in a reinforcement to help shore things up.

It appears as though Maguire has been identified as the solution, and the wait now begins for an official announcement from Man Utd to confirm what would be their third notable signing of the summer after the arrivals of Daniel James and Aaron Wan-Bissaka.

? Harry Maguire is in Manchester as he edges closer to his world-record move to Manchester United