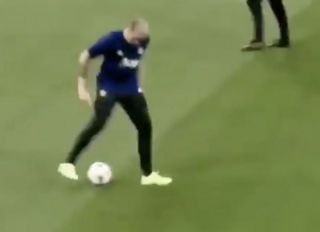 Man Utd defender Phil Jones has had his troubles over the years with being mocked, mainly due to the incredible facial expressions that he tends to pull during games.

While he’s already had one fail earlier in pre-season while trying to pull off an overhead kick, he’s now attracted further unwanted attention.

An eagle-eyed fan was filming him during his warm-up as Man Utd faced AC Milan in a pre-season friendly in Cardiff on Saturday, seemingly convinced that he would do something funny.

Jones didn’t disappoint as while he initially casually walks around with the ball, he attempts some sort of skill only to make a complete hash of it before continuing on his way appearing to think that no one had noticed.

Unfortunately for him, it was captured on camera, and it’s just another reason to love his clumsiness at times.

On a more serious note though, he’ll be expected to face more intense competition for places this season, with Harry Maguire on the verge of an £80m move to Man Utd, with the Mirror reporting that he arrived at Carrington for his medical on Sunday morning.

Who needs Harry Maguire when you have Phil Jones ? pic.twitter.com/RuuFO57aCS