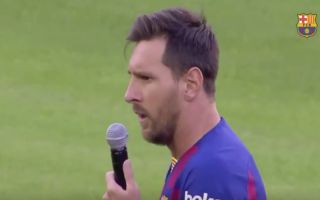 Lionel Messi issued a rallying cry to Barcelona fans ahead of their side’s clash against Arsenal in the Joan Gamper trophy today.

As seen below, Messi addressed the Blaugrana faithful ahead of his side’s match against the Gunners, with the Argentine stressing the belief he has in his teammate to deliver in the upcoming season.

During his speech, Messi affirmed the faith he has in Barca’s current squad, stating that “I believe in this squad, in these players, in the coaching staff. All together, we are going to fight for everything”.

Messi’s entire speech has been translated by the Evening Standard, and can be read in full here.