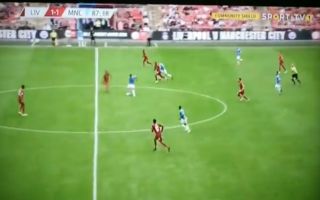 Gabriel Jesus did something rather impressive this afternoon, as he helped Man City beat Liverpool to win their second consecutive Community Shield.

City beat the Reds 5-4 in penalties after the two sides drew 1-1 inside 90 minutes, with Jesus himself scoring the winning penalty in the shootout.

Going into the game, Van Dijk hadn’t been dribbled past in 519 days, since Mikel Merino did so for Newcastle back in March 2018.

However, Jesus managed to break that streak during the match, as seen above.

Although he may not have known about it, we can bet the Brazilian was slightly chuffed with this feat!

65 – During the Community Shield final, Virgil van Dijk was dribbled past for the first time in his last 65 competitive appearances (by Gabriel Jesus) for @LFC since Mikel Merino did so for Newcastle in March 2018. Human. #CommunityShield pic.twitter.com/24B6WFcKUw