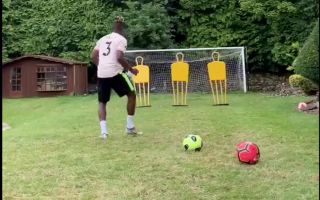 Wilfried Zaha posted a video of himself practicing free-kicks in a Manchester United shirt today, with Red Devils fans now urging the player to seal a move back to Old Trafford this summer.

Zaha has been linked with a number of clubs this summer, with one of these being Arsenal as per i News, who state that the Gunners are still interested in signing him despite having already landed Nicolas Pepe.

Amid this, Zaha seemed to have fuelled rumours regarding his future after he tweeted a video of him practising free-kicks whilst donning a United top, which can be seen below.

And following this, a number of the club’s fans have taken to Twitter to call for the player to rejoin United this summer.

Wishful thinking, but we can’t blame them for trying!

Come back to united #Glazersout

Please come back! You are far better than Rashford

Come back to Manchester! I always thought that we did not use him wisely, great player, for me i will be always glad to see him back

@ManUtd this is the sort of player he want at the club. Someone that wants to play for the badge. Man united fan. Zaha came to the club too soon. You would pair up perfect with spiderman i bet

Ngl, I'd take Zaha back in a heartbeat. https://t.co/t6zVqbaPxB

I would love him back at United honestly.