Bristol City are leading the race to sign this talented Arsenal youngster, the Gunners have received a staggering 23 loan bids for the ace.

According to the Bristol Post, Bristol City are increasingly confident of landing the loan signing of Arsenal ace Eddie Nketiah before the second game of their Championship campaign.

The Bristol Post understand that the Robbins are leading the race against several Championship clubs to secure the striker’s signature.

Cardiff, Swansea and QPR were also amongst the clubs in the race for the ace.

The report also claims that manager Lee Johnson sees the 20-year-old as the club’s No.1 target as they look to complete their squad ahead of a lengthy campaign.

The Bristol Post have revealed that the Robbins have moved ahead of their rivals after making an increased financial offer to Arsenal, the club’s good track record with young players has also helped them move into pole position.

It would’ve been difficult for Nketiah to leave the Emirates Stadium because he was the club’s third-choice striker until the Gunners made the club-record signing of Nicolas Pepe for £72m, according to BBC Sport.

Nketiah has been outstanding during pre-season with goals against Bayern Munich and Fiorentina. The England youth international could really make a name for himself this season.

On Nketiah. At last count yesterday 23 teams had asked for a loan ?

Nketiah made his senior debut for the Gunners during Arsene Wenger’s final season, the exciting attacker showcased his talents by scoring for Arsenal during their Europa League campaign. 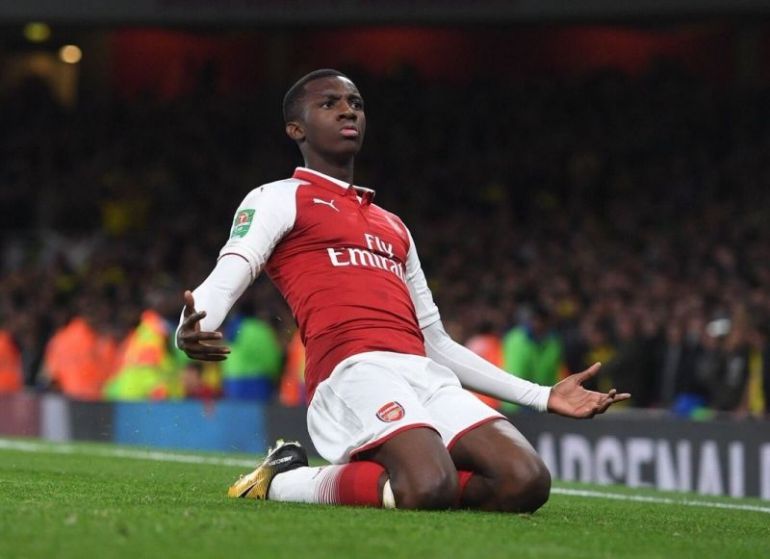 Nketiah in action for Arsenal’s first-team.

Nketiah’s eye for the back of the net has been noticed by the England setup, the ace has been capped at Under-16 to Under-21s level for the Three Lions.

Nketiah has a very impressive record of 21 goals in 25 appearances for England’s youth sides, it looks as though the ace is ready for some first-team action and there’s no doubt that a manager like Lee Johnson would be prepared to place some responsibility on the youngster’s shoulders if he was to move to Bristol City.

It’s worth noting that Nketiah is a more well-rounded and highly-regarded talent than Chelsea’s Tammy Abraham was before he made a name for himself out on loan at Bristol.

Regardless of if Nketiah stays in Unai Emery’s squad or heads out on loan – everyone should keep their eye on this exciting talent.