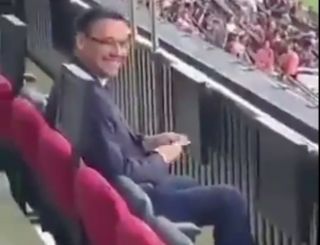 A Barcelona fan took to literally shouting Neymar’s name at Blaugrana president Josep Maria Bartomeu yesterday, as his side took on Arsenal in the Joan Gamper trophy.

Barca ended up winning the match 2-1 thanks to goals from Luis Suarez and an own goal from Ainsley Maitland-Niles, as the Spanish giants win the trophy for the seventh consecutive season.

However before the game, one Barca fan video’d himself shouting the word “Neymar” at Bartomeu in the Camp Nou stands, with the president then smiling whilst returning to looking at his phone.

Goal have reported recently that Barca hopeful of signing Neymar this summer, with the club even preparing an official offer for the winger that’ll be made very soon.

And it seems like this Blaugrana fan has cottoned on to the Neymar news and made his opinion to Bartomeu known if this video is anything to go off!