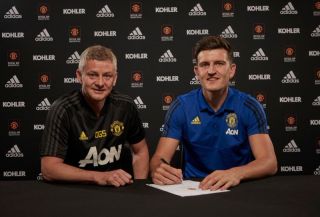 Man Utd finally announced the signing of Harry Maguire on Monday, ending a summer-long transfer saga and pursuit of the towering centre-half.

As noted by BBC Sport, the Red Devils are said to have splashed out a whopping £80m to prise him away from Leicester City, making him the most expensive defender of all time.

In turn, they’ll hope that the England international can repay that faith over the coming years by shoring up a leaky defence, with Ole Gunnar Solskjaer set to rely heavily on his latest recruit to provide a solid foundation on which his side can go out and win games on a consistent basis.

As confirmed by the club’s site, Maguire has put pen to paper on a six-year contract with an option to extend for another 12 months, and with his wages combined with the transfer fee, Man Utd are spending a huge amount of money on the 26-year-old in total.

The Daily Mail report that Maguire is set to earn £190,000-a-week at Old Trafford, and while that is a significant fee when combining their expenditure, ultimately if their third signing of the summer helps them achieve their objectives this season and beyond, it will matter little as to how much they have spent.

Solskjaer has made a point of tightening up his backline this summer with the signings of Maguire and Aaron Wan-Bissaka, and so now it remains to be seen if the pieces fall into place for them to launch a genuine bid of breaking back into the top four in the Premier League and competing for trophies.

With the likes of Marcus Rashford, Anthony Martial and Paul Pogba providing the quality in the final third, Maguire will look to add balance to the side and improve a defence that conceded 54 goals in 38 Premier League games last season, giving them the worst defensive record of the top nine sides in the standings.

If he can do that, then United will feel as though they’ve spent big and wisely on an issue that needed to be addressed.