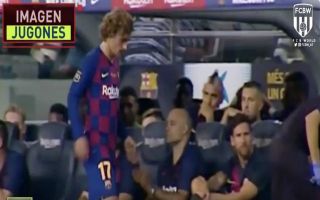 Lionel Messi seemed to ignore Antione Griezmann as he walked back to the bench after being substituted during Barcelona’s win over Arsenal.

The two teams met in the Joan Gamper Trophy final at Camp Nou on Sunday night, with the Spanish champions emerging 2-1 winners thanks to an Ainsley Maitland-Niles own goal and a late Luis Suarez strike.

Barca’s £107 million summer signing Griezmann (fee confirmed by BBC Sport) was also given a run-out, but after a relatively quiet performance, he was substituted, leading to a strange encounter with Messi.

The Argentine superstar appeared to snub the Frenchman’s handshake, after the rest of the Barca squad had acknowledged him upon his return to the dugout.

Ronaldo would never. Messi just jealous Griezmann is a World Cup winner and he isn’t and will never be. pic.twitter.com/b1FtHDyu1x