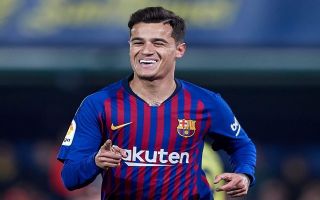 Arsenal have reportedly agreed a deal to sign Philipe Coutinho on loan from Barcelona, some Gunners fans are amazed by news of the superstar’s imminent arrival.

According to French publication L’Equipe, Barcelona superstar Philipe Coutinho has agreed to join Arsenal on loan this summer.

Emery told Cadena Ser via Mirror Football that Arsenal “never talked’ about a move for the 27-year-old, before describing him as a splendid player.

Coutinho has struggled to live up to expectations since his big-money move to Barcelona.

According to Spanish outlet Mundo Deportivo via Catalunya Radio, Barcelona are prepared to allow Coutinho to leave on loan this summer for a fee of €25m-30m (£23m-27m).

Coutinho’s career has gone downhill since he left Liverpool for the Camp Nou 18 months ago, the 27-year-old has failed to prove his worth after the Blaugrana splashed a staggering £142m, as per BBC Sport, to secure his services.

Coutinho’s only hopes of reigniting his career hinge on leaving the La Liga champions this summer. It’s incredibly unlikely that the Brazilian will find a place in Ernesto Valverde’s midfield or attack – given the summer arrivals of Frenkie de Jong and Antoine Griezmann.

Check out some reaction to the rumours:

Oh my lord if this is true we’re winning the league by outscoring everyone ??? https://t.co/arEfBN6ztd

We’re actually going to win the league by winning 6-5 every game ???

Fuck it, one defender, torreira and 8 attacking players, we’re winning the league mate

If Coutinho joins Arsenal, we are definitely going to be up there for the prem title

Arsenal winning the title with no defenders. Read and weep @JamesDeeny1

First Pepe now Coutinho. I really think we can fight for the title. Don Raul did it again.#arsenal

Unai Emery will be hoping to tap into Coutinho’s impressive form for Liverpool that led to his marquee move to Barcelona.

Despite the reports from France, Mirror Football understand that Coutinho will still train with Barcelona this afternoon at Barry University in Florida.

Can Coutinho re-establish himself as one of the world’s best in his position with a move to the Emirates Stadium?

More importantly will Arsenal manage to pull off Coutinho’s signature before the transfer window closes on Thursday?