Stromsgodset hosted Bodo/Glimt in a domestic clash at the start of the week, running out 3-1 winners thanks to an Evjen brace and a late goal from Amor Layouni.

According to Norwegian broadcaster TV2, Manchester United sent scouts to watch the 19-year-old in action ahead of a possible transfer swoop.

The report states that Manchester City officials were also in attendance as Evjen took his tally for the 2018-19 campaign to six goals in 14 league appearances.

The teenager addressed transfer rumours after the match when asked if he was aware of the interest from the two Manchester clubs, hinting that United would be his preferred next destination.

“I don’t know, we’ll see,” Evjen told TV2. “Nothing has come yet, but I have always been a United boy.

“But of course, City is one of the world’s best football teams.” 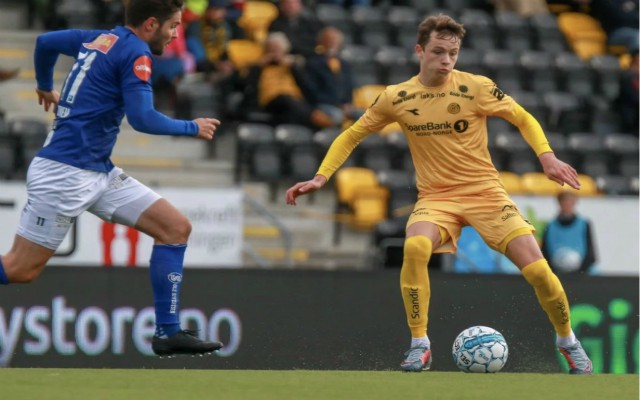 Pictured in the yellow kit, Evjen has been in fine form for Stromsgodset this season

The midfielder is still very much a raw talent, but Ole Gunnar Solskjaer will surely be excited by the prospect of linking up with a fellow countryman at Old Trafford in the near future.

It remains to be seen whether or not United will launch a bid before Thursday’s transfer deadline, but Evjen’s latest performance suggests he would be a valuable addition to the club’s ranks.

The Red Devils have already brought in Daniel James, Aaron Wan-Bissaka and Harry Maguire so far this summer, with a focus on targeting young, homegrown players ahead of the new season.

Evjen may not be homegrown, but he is a young player with bags of potential and United would be wise to make a move quickly especially if their noisy neighbours’ City also decide to submit an offer.