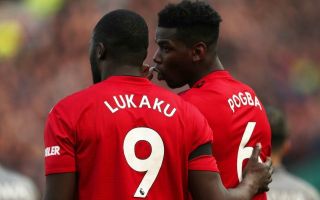 After reportedly failing to return to training on Tuesday, Romelu Lukaku is said to be facing a possible £390,000 fine from Man Utd.

The Belgian international has been linked with an exit from Old Trafford this summer, with Sky Sports noting that both Juventus and Inter have been paired with signing him.

However, with just over 24 hours remaining ahead of the transfer deadline for English clubs, he remains a United player but has sparked tension this week after failing to return to training.

As noted by HLN, it has been reported that Lukaku has spent the last two days training at former club Anderlecht’s base, and while he had a day off on Monday, he was expected back at Carrington yesterday to resume preparations for the new campaign.

However, that didn’t materialise and the report above goes on to add that he’s pushing for an exit to Italy, while Ole Gunnar Solskjaer is ready to axe him. Until an agreement is reached though, there has yet to be a crucial breakthrough to send Lukaku elsewhere.

That decision to not return to training though could prove to be a costly one for the 26-year-old, as The Mirror report that he could now be fined two weeks wages for his no-show, and given he is said to earn £195,000-a-week, that could result in a loss of £390,000 in earnings.

Worryingly, it’s added in the report that Man Utd still don’t actually know when Lukaku plans to return to Manchester, and so the situation could yet become more complicated.

It’s a risky game from the former Everton man, as ultimately if he isn’t able to secure a move away from Man Utd this summer, with the transfer window shutting in Italy on September 2, he could be stuck at Old Trafford having left the likes of Solskjaer less than impressed with his conduct.

That could be a possible scenario as well given the report above adds that while Juve talks have collapsed, United want £75m for Lukaku, and Inter are still struggling to meet those demands. Perhaps trying to force a move through will force the Red Devils to lower their valuation slightly to reach a compromise though.