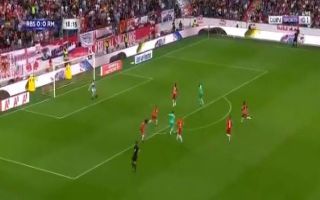 Generally speaking, pre-season results are fairly meaningless and should just be abut building fitness in preparation for a new season. That doesn’t mean that Eden Hazard won’t be delighted to get off the mark for Real Madrid following his summer move.

Real have been very poor this summer after being humbles by Atletico and losing to 10 man Bayern Munich a few weeks ago. Things look to be picking up thanks to the Belgian’s first half strike against RB Salzburg.

It’s a trademark effort from Hazard as he cuts in from the left, dances past a couple of players and sidefoots a finish past the keeper from the edge of the box. It’s even more impressive given hes running away from goal as he hits it and also has several players closing him down.

Real fans will be hoping this is just the start of things to come this season.