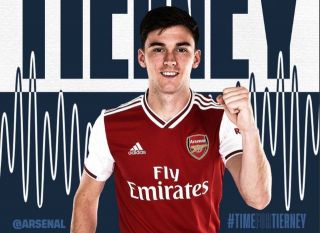 Arsenal have confirmed the signing of Kieran Tierney from Celtic, with the club confirming that he will wear the No.3 shirt this season.

The Gunners have been relatively busy in the transfer window, bringing in Gabriel Martinelli, William Saliba, Dani Ceballos and Nicolas Pepe.

Saliba has since moved back to Saint Etienne on a season-long loan deal, while Ceballos is at the Emirates on a temporary basis.

In turn, while there are pieces being added for a long-term plan under Unai Emery, the Spanish tactician will be delighted with their latest purchase.

As confirmed on the club’s site, they have signed Tierney from Celtic, and while no details of the transfer fee or contract are offered, the Gunners have confirmed that the Scottish international will wear the No.3 shirt moving forward.

“We’re delighted Kieran is joining us,” Emery said of his latest recruit. “He’s a very talented player who will continue to improve. He increases our options defensively and I look forward to him joining our group.”

Meanwhile, The Sun report that the deal will cost Arsenal £25m, while the suggestion is that Tierney has put pen to paper on a five-year contract to make the move to north London.

It’s a quality addition for the Gunners as despite still only being 22 years of age, the former Celtic ace has shown his class in Scotland and has gained plenty of experience at the highest level in Europe.

In turn, Emery will be pleased to bolster his options at left-back, in a move that he will undoubtedly hope goes some way to fixing their issues in defence after conceding 51 goals in 38 Premier League games last season, giving them the second worst defensive record of the top nine sides in the standings.

Tierney will likely face competition from the likes of Nacho Monreal and Sead Kolasinac, but given their injury troubles over the past season or two, it seems like a sensible decision from Emery to bring in a long-term solution to add balance with Hector Bellerin on the other flank.

Welcome to The Arsenal, @kierantierney1 ?