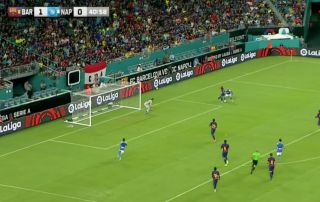 Junior Firpo had a moment to forget on his Barcelona debut, as he made a mistake which was capitalised on by Napoli, who ended up equalising as a result.

Having just gone 1-0 up thanks to a clean strike from Sergio Busquets, Barca were pegged back by their Italian opponents as Ancelotti’s side made the most of an error from Firpo.

After intercepting a ball over the top, Firpo decided to take a touch instead of clearing the ball out for a corner, with the Spaniard then getting tackled just outside his own six-yard box, which lead to Samuel Umtiti scoring an own goal just moments later.

Lets hope Firpo doesn’t make too many mistakes like those during his Blaugrana career!