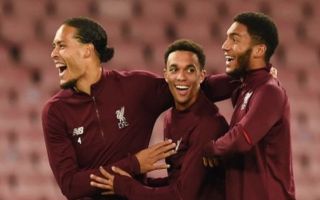 Liverpool fans flocked to Twitter this evening to berate defender Joe Gomez for his rather lacklustre performance for the Reds during their 4-1 win against Norwich.

The Merseyside club hammered the Canaries in their opening Premier League game of the season, with strikes from Van Dijk, Salah and Origi, plus an own goal from Grant Hanley, proving to be the difference between the two sides in the end.

It was an impressive performance from Jurgen Klopp’s side, who looked to stamp their mark down on the PL title race straight from the off.

However, despite their side’s very impressive display, it seems like some Reds fans weren’t at all impressed with Gomez’s performance tonight.

The youngster did well to prevent Norwich scoring more than the one they managed, however this doesn’t seem to have stopped some of the club’s fans slamming him on Twitter both during and after the match.

Klopp opted to start the England international ahead of usual started Joel Matip this evening, a move that some Liverpool fans would’ve hoped against seeing if their tweets regarding the Three Lions star are anything to go off.

The scoreline hides it, but Liverpool's defence and organisation at the back tonight has been awful.

Gomez is off the pace. I'd have Matip in the Super Cup.

Trent and Joe Gomez have been terrible in defence tonight , lile really really bad.Matip should be playing centre half.

Trent and Gomez have been all over the shop defensively :/

Trent & Gomez defensively been all over the place. V fortunate it's Norwich at Anfield.

I’d start Matip next league game, we’re so exposed on the right with Trent and Gomez

Gomez was basically a traffic cone