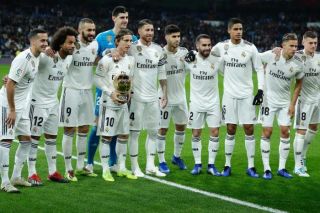 Real Madrid could reportedly face a major setback in their quest to sign Neymar as Luka Modric has no intention of leaving the club.

SPORT reported a couple of days back that Real Madrid were willing to pay PSG €120 million and Luka Modric in exchange for Neymar. However, a report from MARCA has now stated that the Croatian’s representatives have made it clear that he will not be leaving the Santiago Bernabeu.

Modric has made 303 appearances for Los Blancos since joining the club in 2013. He has scored 17 goals and has provided 47 assists so far.

After leading Croatia to the World Cup final last summer which followed helping Real Madrid to their 13th Champions League title, many expected the midfielder to have a strong 18/19 season for Los Blancos.

However, Modric’s season was quite mediocre. The Ballon d’Or winner scored 4 goals and provided 8 assists in 46 appearances across all competitions. He lacked the vision that made him one of the finest midfielders in the world.

Modric will certainly try to keep his place in Real Madrid’s squad by not leaving in the transfer window. However, this surely foils Real’s plans to sign Neymar. Given the amount of money they have spent in the summer on the likes of Eden Hazard, Luka Jovic and Ferland Mendy, the best way for them to sign the Brazilian is arguably by offloading players in order to create space in the squad and raise funds.