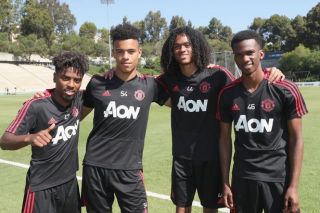 Lukaku joined Inter Milan for a club record fee of £74 million according to BBC. The Belgian striker had a disappointing 18/19 season, scoring only 15 goals in 45 appearances across all competitions. However, his scoring record for the national team remains prolific. The 26-year old has netted 31 goals in his last 30 internationals.

Solskjaer feels that despite the absence of Lukaku, he hopes to see the likes of Anthony Martial, Marcus Rashford and Jesse Lingard to be among the scorers this season. The Red Devils manager also said that Mason Greenwood can receive more game time this season in Lukaku’s absence.

As quoted by Manchester United’s official site, Solskjaer said: “Of course, Rom [Lukaku] has a good record and good stats. He’s one of the top number nines around, when you want to play with that kind of striker, and he’s that target man. For me, I’m very confident that we’ll get goals from [Anthony] Martial, [Marcus] Rashford. Dan James will come in and create. I’m sure Jesse Lingard will get more [goals], so we do have a different attacking set-up this season.

“You do have players that you think are going to make an impact and Mason Greenwood’s pathway would have been a lot more difficult, of course, if we had another forward there. So, for me, I believe that Mason’s going to be playing and involved a lot, and, when he is, he’ll score goals.”

17-year old Greenwood made only 4 appearances for the senior team last season, starting in Manchester United’s final league game against Cardiff City. He impressed during pre-season, scoring two goals and often being efficient on the right wing. Hence, there is no doubt that the teenager will receive more game time this season.

There’s no telling whether Greenwood will start against Chelsea on Sunday but Solskjaer will certainly consider involving him moving forward this season now that a space in the squad has opened up.