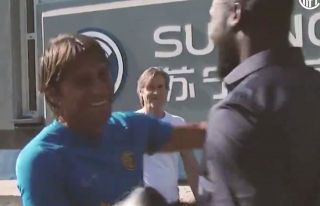 Romelu Lukaku’s transfer to Inter was confirmed on Thursday as he departed Man Utd in a deal said to be worth £74m.

As noted by BBC Sport, the 26-year-old has signed a five-year deal with the Italian giants after the fee was agreed, ending a two-year stint at Old Trafford after a difficult season last year and a summer filled with speculation over his future.

He’ll now embark on a new challenge in Italy as he hopes to lead the line for the Nerazzurri both in Serie A and the Champions League, and judging from the video below, it’s fair to say that Antonio Conte is delighted to have landed his top target.

Further, there was also a huge decision confirmed from Inter, as they announced that Lukaku would wear the No.9 shirt this season, thus stripping Mauro Icardi of the number as his troubles at the San Siro continue after losing the captaincy in the latter half of last year.

Time will tell if that signals an exit for the Argentine or if he will stay as back-up to Lukaku, but given the pursuit, the transfer fee and how Conte is essentially stamping his mark on the squad, it’s difficult to see Icardi getting his place back unless his marquee summer signing suffers an injury or a serious loss of form.

For now though, he’ll be focused on helping Lukaku to settle in and rediscover his best form.