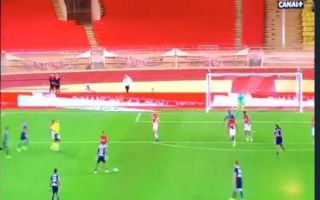 Memphis Depay arrived in Manchester with such a huge reputation but just couldn’t live up to it. He looked like a one trick pony and was moved on. Since moving to Lyon he has re-established himself as an exciting young talent.

His goal tonight put Lyon 2-0 up against 10 man Monaco and surely put the game beyond doubt.

Monaco’s new keeper Benjamin Lecomte was outstanding for Montpellier last season but does an awful impersonation of a 5 a-side goalie here as he lets the ball go past him.

The Dutchman hit it hard but it shouldn’t have gone in.

Memphis Depay makes it 2 for Lyon but what was the keeper doing or what was he thinking #confuse pic.twitter.com/eaZ8faBgQe