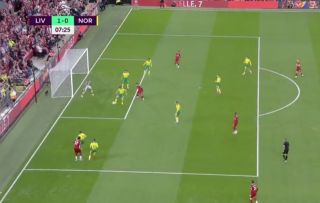 Divock Origi forced an own goal from Norwich defender Grant Hanley this evening, as the Reds scored the first goal of the 2019/20 Premier League campaign.

With the game just a few minutes old, Origi took on his man down the left wing before firing in a cross which Scottish international Hanley ended up turning into his own net.

It’s a great, early start from Jurgen Klopp’s side, who will now be looking to add to their lead during the remainder of this match and put their marker down in the Premier League title race early.