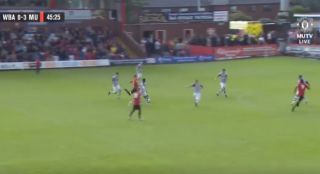 James Garner scored an absolute beauty for Man United U23’s clash against West Brom this evening, something which lead to some of the club’s fans labelling him as the second coming of Paul Scholes.

As seen below, Garner bagged a peach of an effort for the Red Devils’ youth side against the Baggies today, with some fans then taking to Twitter to praise the youngster for his effort.

A number of fans took to the social media site to compliment the United youth prospect, with some fans even describing him as ‘Scholes 2.0’.

The future is bright for us!

Garner got a bit of Scholes in that right peg hasn't he ??

Garner gets it now..turn with left to get away from defender, then the hit at the far post reminiscent of Scholes against Barca in UCL semis

We know Garner’s goal was good, but comparing him Scholes this early on in his career is a sign that United fans may be getting a bit ahead of theirselves!