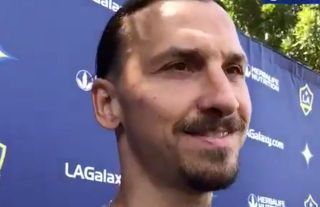 It’s fair to say that LA Galaxy superstar Zlatan Ibrahimovic isn’t a huge fan of the playoffs system in MLS and made it clear to reporters this week.

As seen in the video below, the 37-year-old was discussing his thoughts on the current system, with LA Galaxy currently sitting in fifth place in the Western Conference.

With the teams from first place to seventh advancing beyond the regular season, Ibrahimovic believes that the ability to be able to settle for a top-seven spot ultimately has an adverse affect on players in terms of pushing themselves to be at their best every day.

In fairness, he has a point. It’s certainly not something he’s used to in Europe as every game is vital, especially if competing for a title for a Champions League qualification spot when the competition is so fierce.

In turn, the level of intensity perhaps drops in MLS given there is more room for manoeuvre, and based on his comments below, that isn’t something that he likes. Unfortunately for him though, it’s unlikely that he is going to be able to revolutionise the way MLS sets things up…