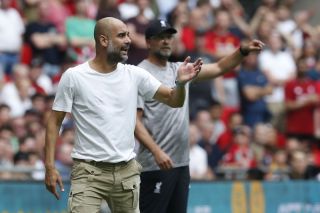 Manchester City manager Pep Guardiola has said that Riyad Mahrez did not feature in the Community Shield as a precautionary measure the club took.

After leading his nation to their first AFCON title in nearly three decades, Mahrez was omitted from City’s Community Shield squad.

Guardiola explained that dropping the Algerian was a precautionary measure as the club did not get any details about a surgery he underwent on his nose following the AFCON.

However, the Spaniard confirmed that Mahrez was made available for today’s match against West Ham. As quoted by talkSPORT, Guardiola said: “He had a little surgery after the African Cup on his nose so he could breathe better. It’s a normal situation (but) the doctor, not from the national team, didn’t send the necessary (information).

“That was the only reason why (he did not play). We didn’t have it in the right moment. It was a precaution, we had to be careful. It was better not to use him.

Mahrez is currently playing Manchester City’s Premier League opener against West Ham in London. The winger arrived at the Etihad last summer and made 44 appearances across all competitions last season, scoring 12 goals and providing 12 assists.

However, he made only 27 starts due to the presence of Leroy Sane and Bernardo Silva.

With Sane out of action for several months due to an Achilles tendon injury he sustained in the Community Shield against Liverpool, the Algerian international will most likely receive more starts this season.